Notes from Jodi: In Lab and Field

This week I was assigned to lab. I was able to see what had come in from Block L and survey which was interesting because when I am up at the flag staff I have no contact with the rest of the group until the end of the day. As expected, there were many small sherds of many different types of ceramics to process because the week before block L had reached the house floor. There were also a lot of square nails, broken glass, broken clay pipe pieces, and many different types of artifacts to clean too.

On the first day we had a group of kids visiting from the Chehalis Tribe. There were about 35 kids and 6 adults. They were really interested in how we clean and process each different kind of artifact and they really seemed to enjoy viewing the many different artifacts we had out on the table at the time.

I was also able to process my own finds from the flag staff and that was pretty nice to be able to see the artifacts come from the ground covered in soil to cleaning them up and getting them ready for processing. They look very different when all of the soil has been removed. I was even able to clean the wood that we recovered. We had to lightly brush the wood so that we wouldn’t destroy it. I think it’s pretty amazing to find wood in such great condition after being buried for over 125 years! It almost looked brand new! 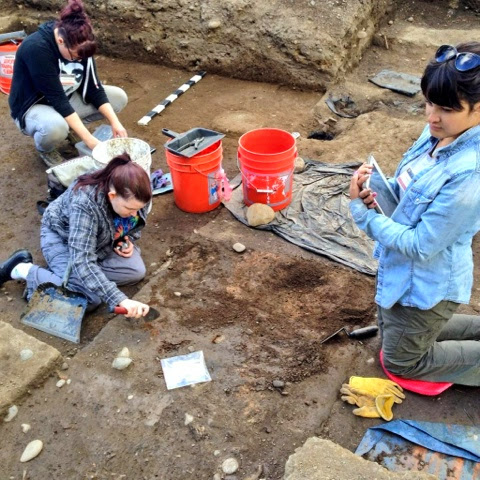 After 2 days of lab, we were moved out to Block L because there wasn’t that much left to process in the lab. I began to work on unit L31 and was able to uncover over 40 sherds of ceramics and at least 20 pieces of glass. I also began to uncover a large triangular shaped piece of metal but I had to leave it in situ because it is still protruding out of the next level. I can’t wait to see what it may be!

In the unit next to me is where all of the action seemed to be. Heidi was working in that unit and uncovered a very large iron key! 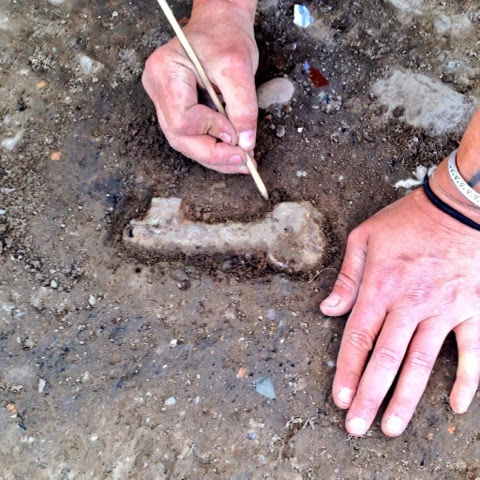 She also uncovered a large molar tooth that turned out to be pig's tooth. There were also many other large animal bones and post holes uncovered in Block L. In other news, I heard that at the Flag Staff dig they have reached 120 cm down and still have not reached the bottom of the pit that was dug to hold it. I wonder if they will uncover the flag staff this week? This is very exciting!